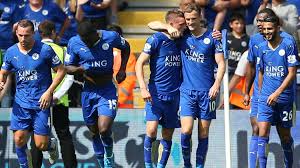 I am fascinated by Leicester City’s success in the English premiership soccer league and before you scroll away from this, please hold on, I am not a soccer fan, but still, I really wanted to know why they are top of the league in the face of extremely stiff competition and coming from a position last year where they miraculously escaped relegation right at the last minute.  As a trainer and coach of individuals and teams, I want to know Leicester City’s secrets.

So, I asked the men in my life, husband and sons, what’s up there?  Their answers were unified, from an 11, 15 and a 51 year old (two are Man U fans and one follows Spurs – the latter being another story of surprise success) and here are the answers:

Top of the list of factors for success at Leicester is Team Spirit.  We all know that winning teams have that amazing cohesion of spirit, resilient in the face of competition and in defeat, turning losses into lessons learned and fighting hard because they have the motivation to keep going no matter what comes their way.  This is exemplified, apparently, at Leicester. They also know how to win without ‘losing the head’ and getting complacent. I added the following observation into the mix. Maybe the fact that they came from such a low position in the league table, are not paid as much as other teams, have no dazzling internationally acclaimed soccer stars on the team (yet!) translates into less pressure, lower stress, more balanced lifestyles, less adulation by fans to distract them from the mission at hand.

The second factor, again no surprise here, is the Manager, Claudio Ranieri.  The leader, the coach, the manager, key to the success of any team, no matter how talented they are, the manger is the one who knows how to bring out the best in them; sees their talent, develops their potential, knows when to praise and when to correct; gets the best out of each individual and the team, always.  They want to win for the team and for the Manager: inspiring leadership at its most exemplary.  Did Chelsea lose out here I wonder by leaving Claudio Ranieri go?

The third factor, of course, is talent. But, we know from other teams, that talent is not enough to win (see Man City here), if factors one and two are not there, all the Ronaldos or Jamie Vardys in the world will not translate into success.  Of course, if there is no talent, factors one and two won’t bring success either, so talent is a given and the more the better of the right players in the right positions at the right time. This is what recruitment, talent identification and development are about: Leicester seem to be ahead of the game here and for less, far less, money than other more prestigious teams (however long that may last).

We can learn so much about team work, management and talent acquisition/development from sporting greats; taking a look at Alex Ferguson or Claudio Ranieri, and discovering what is so magical about the team and the manager that beats all the odds.

Hope Leicester City win the league and if they don’t, what a wonderful achievement: fingers crossed the most talented players don’t move on for millions of pounds at the end of the season, now, next challenge: how to hold onto the talent, that’s another story.