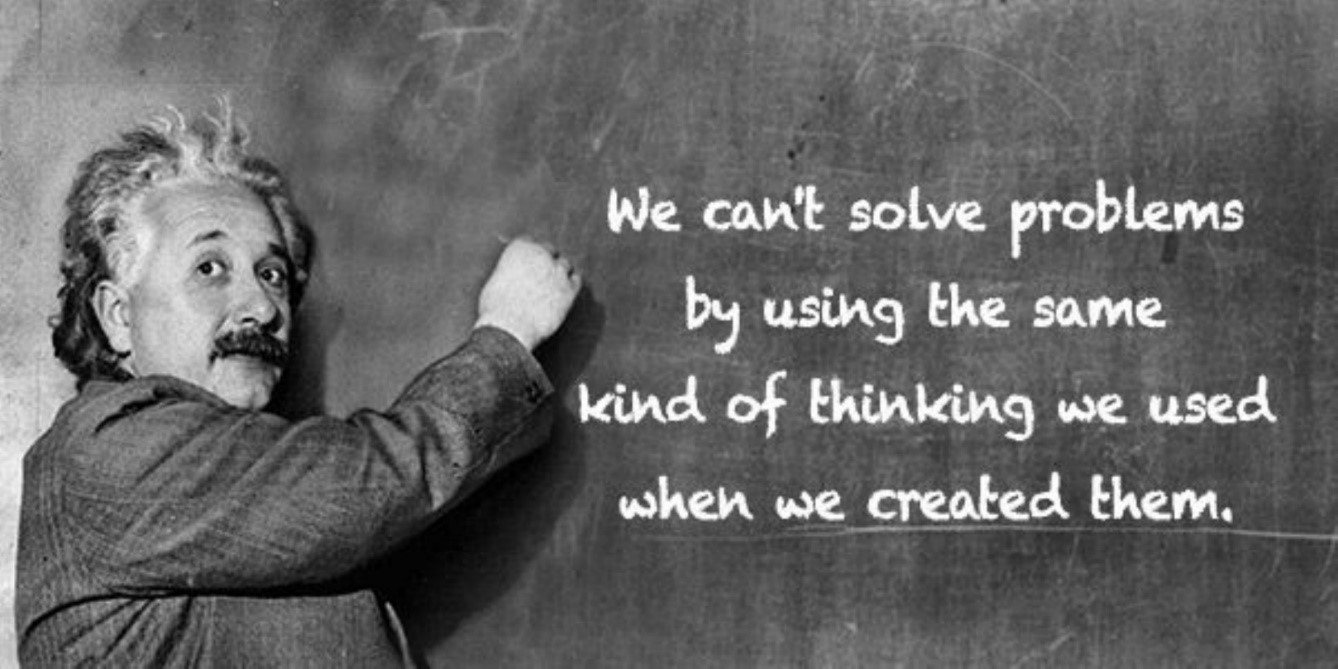 A famous tale about Albert Einstein is that he dreamed up the theory of relativity when riding his bicycle. Businessman Warren Buffett is on record as sayingthat he reads for six hours per day and has very few scheduled meetings. Both of these examples stand in stark contrast to the ways in which most leaders use their time. Many are slaves to email (one CEO only half-jokingly defines his job as ‘ansering 2,000 emails a day“ and have much of the remainder of their time filled with meetings.But a focus on information processing, reaction, and execution — while it may feel productive — causes the quality of our thoughts to suffer. We believe that corporate leaders in today’s complex world urgently need to recultivate the art of reflection.

In reflective thought, a person examines underlying assumptions, core beliefs, and knowledge, while drawing connections between apparently disparate pieces of information. Brain science, has shown that this type of “slow thinking” is negatively correlated with “fast thinking,” as might be employed when driving a car or solving a simple sum. In other words, reflective thinking (slow and deliberative) and reactive thinking (fast and instinctual) effectively exist at opposite ends of a switch. When one is “on,” the other is “off.”

Senior executives are victims of information overload and over-reliance on fast thinking. But some CEOs have managed to resist these tendencies. Bill Gates and Mark Zuckerberg, among others, share Warren Buffett’s discipline to read extensively, safeguard time for personal development projects, and constantly seek new stimulus and perspectives. John Young, Group President of Pfizer Essential Health, remarked to us that reflective thinking improves his decision making by grounding it in a more integrated and coherent world view than one can have from acting only in the moment. From such leaders and from our counseling conversations with CEOs, we suggest some simple principles for leaders to rediscover and unlock the art of reflective thought.

HERE’S HOW TO DO IT FOR YOURSELF…..

Schedule unstructured thinking time. Time is a precondition for slow thinking. To develop a routine, time for reflection should be a regularly scheduled and a protected event on the leader’s calendar. A 2015 Harvard Business School study showed that CEOs’ schedules typically leave them with as little as 15% of their time for working alone. It is fair to assume that a large proportion of even this modest amount of time is likely consumed by reviewing information and dealing with urgent tactical matters, leaving only a tiny fraction for reflective thinking. A survey of 267 C-level executives at Fortune 500 companies suggests that they dedicate as little as 30 minutes per day for “personal development,” usually late in the evening.

There is no single optimal way to carve out time for unstructured thinking. Some will spread it out over the week: Jeff Weiner, CEO at LinkedIn, blocks between 90 and 2 hours everyday for reflection and describes those buffers as “the single most important productivity tool” he uses. Susan Hakkarainen, Chairman and co-CEO of Lutron told us, “I use 40-minute walks to reflect and I read articles for personal stimulus and development over my morning coffee.” Yana Kakar, Global Managing Partner of Dalberg, reserves 3 two-hour blocks of time for reflection each week. She comments, “Thinking is the one thing you can’t outsource as a leader. Holding this time sacred in my schedule despite the deluge of calls, meetings, and emails is essential.”

Others concentrate reflection in a single day. Brian Scudamore, the serial entrepreneur at O2E Brands,sets aside all of Monday for thinking and organizing the rest of the week, which is filled with back-to-back meetings. He also creates a suitable environment for deep thinking by not going into the office on Monday. Phil Libin, former Evernote CEO, uses time in airplanes to disconnect from daily work.

Get a coach. The Socratic Method remains the most efficient way to stimulate reflection. To inspire and refine reflective thought, leaders will often benefit from structured dialogue with a trusted partner. If their relationship is strong, this partner can prompt the CEO with questions, observations, and challenges.

The role of the discussion partner is to facilitate the exploration of ideas, to make reflection more productive, and to build reflective habits and capabilities. In Plato’s dialogues, the principal role of Socrates is to ask guiding questions and provide catalytic inputs that lead students to structure their thoughts and articulate their learnings. The method may be even more relevant today than it was in ancient times.

Cultivate a list of questions which prompt reflective thought. Ideas will rarely simply appear to you. Even the most intuitive forms of thinking often require stimulus and inspiration. In the context of business thinking, a list of divergent questions can be a very useful tool for elevating oneself above tactical considerations. Questions can be adapted to resonate with each CEO’s way of thinking, but would typically include ones pertaining to personal vision, strategy, organization, and leadership, such as:

Protect yourself and your organization from information overload. Peter Drucker recommended to “follow effective action with quiet reflection.” CEOs should ensure that opportunities for quiet reflection are not crowded out by information overload. Simple solutions are available. Think of email norms: chat and messaging to replace internal emails, limited access to large mailing lists, automatic scheduling of emails during working hours, easy disconnection from non-urgent messages, etc. Thierry Breton, CEO of IT services company Atos, referred to his own experience struggling with emails when he designed and launched a ‘Zero-email’ programe in 2011. By the end of 2013, emails were reduced by 60%. They were never fully eradicated, but the initiative is still perceived as a trailblazer, especially as Atos managed to reduce administrative costs from 13 to 10% in the same period.

However, information overload remains a culture issue, a collective addiction. Communication is often shaped by implicit cultural norms weighing on employees. For instance, what is the email response time expected from subordinates? Making those norms explicit is essential to ensure boundaries are set in an equitable way, and not just at the discretion of every manager. In France, a widely commented upon 2017 law created a “right to disconnect” for employees. In practice, large companies will have to negotiate offline time with their staff, forcing them to have a strategy for electronic communications outside working hours. It is too early to judge the outcome, but if disconnecting on weekends simply leads to overflowing inboxes on Mondays, the law will not solve the problem. For reflective companies, the primary challenge is to ensure that excessive communication does not undermine productivity and prevent reflective thinking. To be effective, communication norms needs to be decided, clarified, embraced, and implemented company wide. We would suggest adopting a variant of an oft quoted adage, “Communicate, communicate, think quietly.”

Reimagine yourself as a meta-problem solver. As philosopher Bertrand Russell put it, “there is far too much work done in the world.” Your job as a CEO is to make sure that all work done in your organization is useful and productive, i.e. addresses the right questions.

A meta-problem solver thinks about problem solving. They question the process by which ideas are generated and problems solved, and ensure that the right questions are being addressed in the best manner.

One of the most critical issues for a CEO today is to ensure the relevance of strategies in complex and rapidly changing business environments. The reflective CEO not only questions the strategy itself, but also the suitability of the approach for developing and executing strategy in each situation. Depending on the predictability, malleability, and harshness of the environment, different approaches to strategic thinking are appropriate. Reflective thought is a powerful antidote to the mechanical application of familiar approaches to new situations.

Rather than questioning details of the execution, leaders need to ensure that teams have the right approaches and tools to solve complex problems. If a problem is escalated to you, always ask yourself why your teams were unable to solve it and what you can do to expand their thinking.

Be a role model for your employees. Reflective thinking routines can trickle down the organization with senior executives serving as role models. As part of the radical transparency that he promotes, Zappos CEO Tony Hsieh shares his schedule publicly thus modeling how he uses his time to others.

The most straightforward way to diffuse habits of reflection is to require people to adopt them. At AOL, Tim Armstrong has simply instructed executives to spend one-thenth of each working week on reflective thinking.

There are also more implicit ways to encourage reflection. At Microsoft, when he was appointed CEO, Satya Nadella was ‘known for listening, learning and analyzing’.  The behavior he displayed was essential to promote the culture of exploration required to transform the company.

The CEO’s use of time effectively contributes powerfully to the definition of a corporate culture. Reflective thinking should not be the privilege of the enlightened CEO presiding over an organization which merely executes. As automation and artificial intelligence reduce the share of employee time spent on fast thinking and acting, promoting a culture of reflection will be even more critical in creating a sustainable advantage.

By reviving the art of reflection, leaders can reclaim their time, deploy their fully cognitive powers to the increasingly complex challenges they face and, by inspiring the same behavior in others, liberate employees from the corrosive effects of information overload and incessant reactivity.

If you would like a Coach to support you in your thinking, make contact with Anne Marie Crowley and read here what other leaders and entreprennures have to say about their time with Anne Marie.